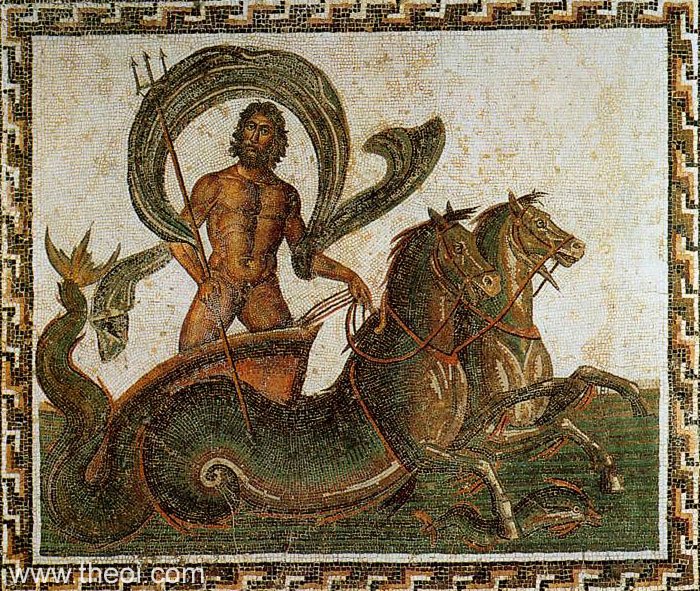 The fable tells that Cleito had five pairs of twin sons with Poseidon, the eldest of which was named Atlas. The ten sons inherited the great city and the first child, Atlas, became the first ruler of Atlantis.

However, it is believed they also built a huge temple for their father with a giant statue of Poseidon riding a chariot carried by winged horses.

The statue was completely built-in gold and placed in a temple with its spiral roof so high up that the clouds drifted through the spirals of the temple.

About POSEIDON: POSEIDON was the Olympian god of the sea, earthquakes, floods, drought and horses. He was depicted as a mature man with a sturdy build and dark beard holding a trident (a three-pronged fisherman’s spear).

Poseidon was a son of the Titans Kronos (Cronus) and Rheia and a grandson of Ouranos (the Heavens) and Gaia (the Earth). He was a brother of the gods Zeus, Haides, Hera, Demeter and Hestia.
Poseidon married the marine-goddess Amphitrite, eldest child of Nereus, first born son of Pontos (the Sea), a marital alliance which secured his dominion over the sea. Their son was the fish-tailed god Triton.
He also had numerous mortal offspring including giants such as Antaios and the cyclops Polyphemos, magical horses like Pegasos and Arion, and various human kings, heroes and villians including Theseus and Bellerophontes

For detailed Info about Stories, family, myth and Encyclopedia about Poseidon, refer https://www.theoi.com/Olympios/Poseidon.html