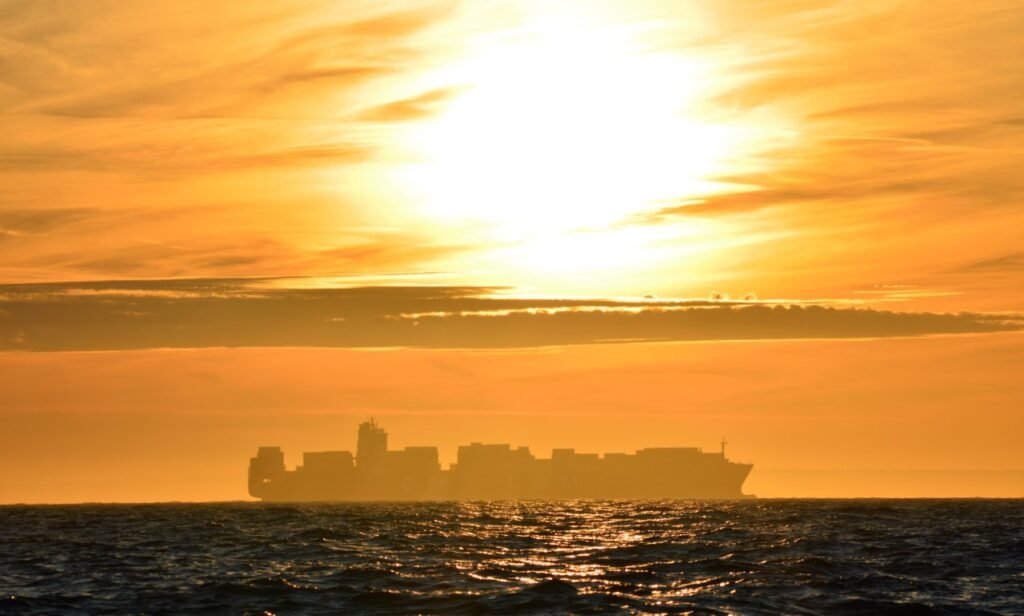 A container ship (also called boxship or spelled containership) is a cargo ship that carries all of its load in truck-size intermodal containers, in a technique called containerization. Container ships are a common means of commercial intermodal freight transport and now carry most seagoing non-bulk cargo.

What are Container Ships?

Container ships are maritime vessels that carry cargo containers, also known as intermodal containers. Sometimes you will hear them called ‘box ships’ because they carry boxes of cargo. Container vessels typically operate on a regularly scheduled set route, this type of shipping service is also known as Liner shipping.

The process of sending shipments in special containers is known as containerization.

I am Hoping that you know about Bulk-Carrier Cargo ships – which carry cargoes in bulk but Container ships are the cargo ships that carry most seagoing in non-bulk cargoes. In today’s world, container vessels have around 90% of the world’s non-bulk cargo. These ships have made it feasible to transfer Large quantities of cargo at faster time.

Container Ships categorized on the basis of Handling Modes:

These are the Container ships

They can operate without port cranes and can do cargo operations unassisted.

ROCONs are ro-ro vessels that also carry containers. The arrangements are such that the containers may be loaded on the deck, or there is a separate hold specifically for loading containers.

Container Ships categorized on the basis of Size:

Some of the main types of container ships based on size are:

A feeder vessel carries boxes that will be loaded onto the mother vessels. They are used to carry cargo through small inland waterways that larger vessels cannot pass through, or used on smaller regional flows from hubs, where it is not efficient to deploy a larger scale vessel. Sometimes Feeders are used for short voyages. Barges are flat top vessels that pass through canals and on rivers and are small than feeders.

The feedermax is the ‘midsize’ freight ship. With a capacity of 3000 TEU it can carry a good amount of cargo while still being able to navigate narrower straits and other small bodies of water. The average feedermax is 170 – 200 m long.

Ultra large container vessels are a class of container ships that cannot pass the locks of the Panama Canal. They can be further categorised as a Post-Panamax, Post-Suezmax, or Post-Malaccamax.

Following the success of the Panamax, the Post-Panamax was introduced. The Post-Panamax is in the league of a relatively new type of vessel – the cellular vessel. These ships are designed to carry ISO standard freight containers stacked on top of each other. Post-Panamax ships have cell guides running through the hold and sometimes up to the deck. This design is intended to reduce the amount of cargo that falls off ships. Loading thousands of containers onto a vessel is a technical feat and not always done perfectly, causing goods to go overboard, but sometimes rough seas are to blame.

Read about: Evolution of Container Vessels

Cell Guides – defined by that space which could be occupied by a single vertical stack of containers aboard a container vessel. Each stowage/hatch space would contain multiple cells, each serviced during loading/discharging by ‘cell guides’

Lashing frame/lashing platform – a mobile, or partly mobile, personnel carrier
which lashing personnel can work on twist-locks at the top of the container
stack without having to climb on the container tops.

Stack – a term when referring to containers, which represents the deck
stowage of containers in ‘tiers’ and in ‘bays’

Why the Need of Container Ships

Bulk cargoes, like grain or coal, are transported unpackaged in the hull of the ship, generally in large volume and it’s generally transported in Bulk Carriers.

Break-bulk cargoes, on the other hand, are transported in packages, and are generally manufactured goods. Before the advent of containerization in the 1950s, break-bulk items were loaded, lashed, unlashed and unloaded from the ship one piece at a time. This way of transporting Break-bulk cargoes was a time-consuming process and there was no Standardized way of lashing these type of Cargoes, Loading and Unloading these types of cargoes used to be a big problem for Ship and Port authorities.

So they came up with an Idea of Containerization, by grouping cargo into containers, 1,000 to 3,000 cubic feet (28 to 85 m3) of cargo, or up to about 64,000 pounds (29,000 kg), is moved at once and each container is secured to the ship once in a standardized way. Containerization has increased the efficiency of moving traditional break-bulk cargoes significantly, reducing shipping time by 84% and costs by 35%. In 2001, more than 90% of world trade in non-bulk goods was transported in ISO containers. In 2009, almost one quarter of the world’s dry cargo was shipped by container, an estimated 125 million TEU or 1.19 billion tonnes worth of cargo.

The initiation of container shipping forms one of the most remarkable developments in the maritime cargo industry. Container ships, a type of cargo ship, have revolutionised how cargo supplies are ferried and transported across the world by assuring the safety and security of the thus transported cargo supplies. Today, some of the biggest shipping companies deal mainly with the containerised form of cargo.

The first models of container ships were launched in the early 1950s and were mainly designed to ferry goods trains’ freight cars. Using crane and ramp systems, these freight cars could be loaded and unloaded from the vessels.

Over the years, technological advancement has made it possible for comparatively far more feasible methodologies. However, crane systems still play a significant role in the loading and unloading operations of the containers to and from the vessels’ holds. Specialised lashing and cargo handling systems are used to secure the containers in their places.

Containers vessels have been through various phases. These phases have been classified as generations.

Fun Fact: MV Kooringa was the world’s first fully cellular purpose-built container ship and was built by Australian company, Associated Steamships Pty. Ltd. in partnership with McIlwraith, McEacharn & Co and commissioned in May 1964.

Container vessels eliminate the individual hatches, holds and dividers of the traditional general cargo vessels. The hull of a typical container ship is a huge warehouse divided into cells by vertical guide rails. These cells are designed to hold cargo in pre-packed units – containers. Shipping containers are usually made of steel, but other materials like aluminum, fiberglass or plywood are also used. They are designed to be entirely transferred to and from smaller coastal carriers, trains, trucks or semi-trailers (and so are carried by different modes of transport during one voyage, thus giving the name intermodal transport). There are several types of containers and they are categorized according to their size and functions.

As a class, container ships now rival crude oil tankers and bulk carriers as the largest commercial vessels on the ocean.

Although containerization caused a revolution in the world of shipping, its introduction was not easy. Ports, railway (railroad in the US) companies, and shippers were concerned about the huge costs of developing the ports and railway infrastructure needed to handle container ships, and for the movement of containers on land by rail and road. Trade unions were concerned about massive job loss among port and dock workers at ports, as containers were sure to eliminate several manual jobs of cargo handling. It took ten years of legal battles before container ships would be pressed into international service. In 1966, a container liner service from the US to the Dutch city of Rotterdam commenced. Containerization changed not only the face of shipping, but it also revolutionized world trade. A container ship can be loaded and unloaded in a few hours compared to days in a traditional cargo vessel.

This, besides cutting labor costs, has greatly reduced shipping times between ports; for example, it takes a few weeks instead of months for a consignment to be delivered from India to Europe and vice versa. It has resulted in less breakage due to less handling; also, there is less danger of cargo shifting during a voyage. As containers are sealed and only opened at the destination, theft has been greatly reduced.

Working on Container Ship – How does a container ship work?

Container ship works based on a principle called containerization.

There are predominantly 2 types of containers :

1 FEU containers are longer than 1 TEU containers. NO matter what both of them fit in the ship’s cargo hold.

Containers are basically brought to port by the trucking company and dropped off.

These containers are lifted from shore and loaded on to the ship’s cargo hold by what is called a gantry crane by a crane operator..

3. Once the ships cargo holds is full a hatch cover is placed on it so that containers are loaded on the deck.

4. Then containers are loaded on the deck. To secure them and prevent them from falling various types of lashings are used.

These are used for containers close to the lashing bridge.

Semi automatic: These twist locks are locked automatically but released manually (commonly used on our ship).

There rest are self explanatory.

Twist-locks are usually used for containers stored high above the deck.

Containerization has lowered shipping expense and decreased shipping time, and this has in turn helped the growth of international trade. Cargo that once arrived in cartons, crates, bales, barrels or bags now comes in factory sealed containers, with no indication to the human eye of their contents, except for a product code that machines can scan and computers trace. This system of tracking has been so exact that a two-week voyage can be timed for arrival with an accuracy of under fifteen minutes. It has resulted in such revolutions as on time guaranteed delivery and just in time manufacturing. Raw materials arrive from factories in sealed containers less than an hour before they are required in manufacture, resulting in reduced inventory expense.

Exporters load merchandise in boxes that are provided by the shipping companies. They are then delivered to the docks by road, rail or a combination of both for loading onto container ships. Prior to containerization, huge gangs of men would spend hours fitting various items of cargo into different holds. Today, cranes, installed either on the pier or on the ship, are used to place containers on board the ship. When the hull has been fully loaded, additional containers are stacked on the deck.

What is Twistlock Lashing System on Container Ships