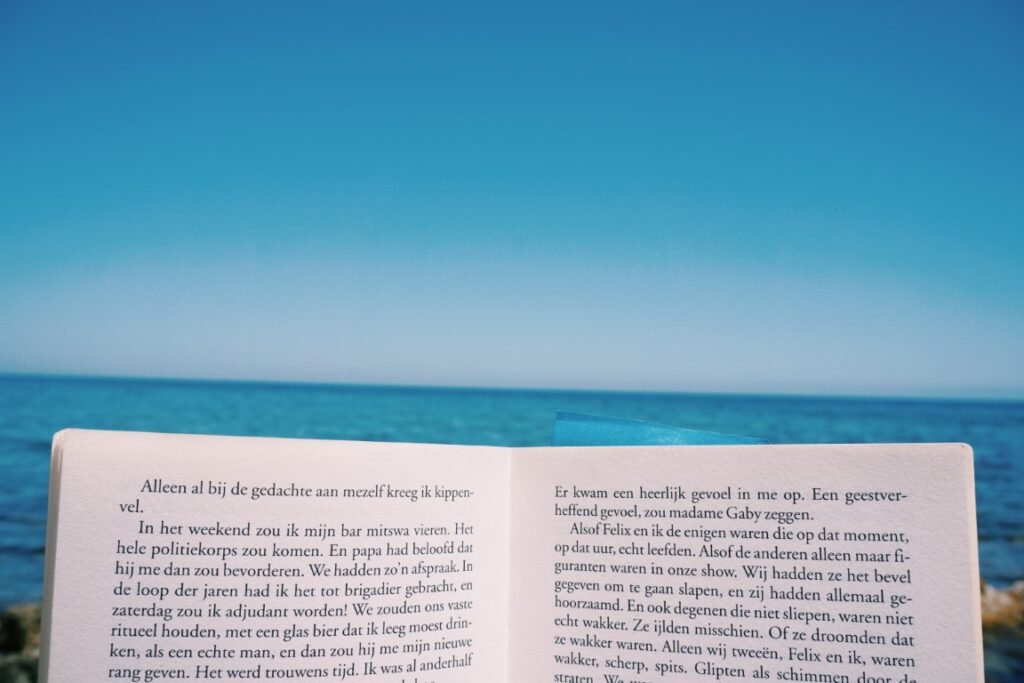 I am a Seaholic and I don’t see myself comfortable among landlubbers. I find peace sailing around the world far away from this cruel world and I am fond of reading Quotes, Novels, stories or Whatever the old sailors have to offer.

“The fog’s just lifting. You throw off your bow line, throw off your stern. You head out the South Channel…. past Nile’s Island and wave to the lighthouse, seagulls, big dump ducks & that last sight of the land.
The sun hits you, Head North, open up to 12.. You’re steaming now. The guy’s are busy, you’re in command. You know what?
You’re a goddamn captain of the ship.
Is there anything in the world?

This thrilling, short but adventurous sea story was written by Ernest Hemingway, a renowned American writer. This is one of the most popular sea adventure novels. it acted as the most important work in Hemingway, winning the Noble prize award in literature in 1954 and was also awarded the Pulitzer Prize for fiction in 1953.

This is a must-read for every sea adventure story lover. It is a book about an old Cuban fisherman Santiago, with a giant marlin. Santiago, the fisherman, tried all he could for a catch at sea with no luck for 84 days before a Marlin finally got caught on his fishing line. The Marlin was too big for him to pull up despite his struggle. After 3 days of struggling with his catch, he finally got to shore and was bit by a strong sense of disappointment.

Included in the New York time’s 10 best books of 2016 and enlisted in the Man Booker prize 2016, North water. A thrilling and exciting sea adventure novel was written and published in 2016 by Ian McQuire, an excellent writer. Ian McQuire, tells a story about Patrick Summer, an ex-army Irish surgeon and some group of men, on a voyage for the Arctic, on a nineteenth-century whaling ship. Patrick, a drug addict, joins the ship as a surgeon and meets more nefarious people like Henry Drax on board the ship. The novel features action, violence, and adventure, and it always keeps its readers thrilled.

“It is a vivid read, full of twists, turns, period detail and strong characters. The setting is original too, and the description of harpooning and flensing of a whale have been forever etched on my memory. This melodramatic blood and urine-stained tale is an enjoyable contrast to most literary fiction.”―The Times

“Uncompromising in its language, relentless in the unfolding of its blood-soaked narrative, this is not a novel for the squeamish, but it has exceptional power and energy.”―Sunday Times

“Terrific, seamed with pitch black humour and possessed of a momentum that’s kept up to the final, unexpected but resoundingly satisfying scene…inspired.”―Daily Mail

“The strength of The North Water lies in its well-researched detail and persuasive descriptions of the cold, violence, cruelty, and the raw, bloody business of whale-killing.”―Guardian

The ship, written by C. S Forester, is a fictional story based on an actual event. It tells the story of the battlefield of the site in the Mediterranean Sea during world war two, gotten from the Captain’s logbook.

The author, C. S Forester dedicated the book “with the deepest respect to the officers and crew of HMS Penelope“, and the action described is based on the Second Battle of Sirte.

The novel the ship is divided into twenty-six short chapters, which describe a very short period. The narrative interweaves the men’s stories on board, from the Paymaster Commander to the Captain to the gun crew that fires the shot that changed the course of history, with chapter headings that come from the Captain’s official after-action Report.  Forester did a great job of bringing this book to life.

4. Cast Off – A Jesse McDermitt Novel

After a terrible defeat in Key West, where the subject of Jesse McDermitt’s identity fraud investigation gets away, and which almost costs him dearly, Jesse returns home to his island in the Content Keys, determined to keep those he loves safe from harm.

He makes plans to fly his family and friends to the Leeward Islands for a very special occasion, unaware of events taking place on one small uninhabited island located a short distance from his destination—events that will suck him right back into the fray, as a past nemesis rears their head.

Gold will turn even the most docile into greedy, dangerous people. When the question of rightful ownership is brought up, legal professionals and government officials on the island, as well as those from France argue over a treasure estimated to be worth $20,000,000. But what is the price of one human life?

The simple life isn’t what it’s cracked up to be, and danger abounds in the picturesque city of Gustavia, on the French island of St. Barts, and speeding Mini Mokes on steep mountain roads isn’t the cause.

I have truly enjoyed every single one of his books. You can start at the beginning of the series or you can start with the first one you find available to you and THEN go back to the first one and read them all in order- which is what I did. However you read them, just do it and you will have so many great adventures to take part in. This is what I recommend for you if you are the sort of person that likes oceans and islands and the adventures that happen there.

Captain Blood, written by Rafael Sabatini, is a classical nautical story packed with adventure, action, and romance. The list of Maritime adventure novels is incomplete without this book.

The novel is about an ex-sailor and soldier, an Irish physician named Peter Blood.

Blood was wrongly accused and convicted for treason. fortunately, he escaped from being hung to death and ended up becoming the most vicious and notorious pirate Captain on the Spanish main. In 1935, Michael Curtiz made a movie of the book with the same title, “Captain Blood.

Yes If you’ve already watched THE PERFECT STORM – What a spectacular movies.

This adventure at sea novel is not just about the imagination of the writer. it is actually a real-life story, derived from the 1991 perfect storm that affected North America between October 28 and November 4.

Sabastian Junger tells the perfect storm’s story amazingly, from how the storm was caused by the perilous meeting of two weather front and how men fought to save their lives from the sea.

This novel was written in 1997 and made into a movie in the year 2000 by Wolfgang Petersen.

Must Read Top 10 Ocean movies: Best Movies On the Sea and Shipping

Words jump fully alive off the page describing fishermen’s lives, the scene at a bar, final conversations, safety procedures, wave patterns, PJs training, weather forecasting… I read this because a writing coach said it was the best writing and the most well-crafted book ever, in his opinion. I agree. Sad story but unforgettable.

A first-ever novel, written by Mc Dermott and published in the year 2013, is an amazing Maritime novel that won readers’ hearts far and wide.

McDermott tells the story of Marine engineer Tom Dugan, an unintended victim in the fight against terrorism and piracy. Having a great experience in the Marine world made this book come to life. a reader can easily imagine every context written without putting much effort.

“In a book that takes no prisoners, McDermott tells a tale of high seas terrorism and tells it well. Go get this one, right now!” Cheryl’s Book Nook

“McDermott consistently gets it right. Tom Dugan – a skilled professional a bit rough around the edges – works well as the protagonist. Smart and educated, he regularly gets grease under his nails, and moves easily between action and insight. A book even a thriller skeptic can love. A gripping read – highly recommended.” Rick Spilman, The Old Salt Blog

“After reading Deadly Straits, I no longer await the next Clancy novel. I’m waiting for the next McDermott.novel.” Jeff Edwards – Author of The Sea of Shadows

In 20 years at sea as mate and captain, I’ve been through the Panama Canal too many times to count, and through the Bosphorus and Malacca Straits as well.  You nailed it. Yours was the first novel to convince me the author had been there too. Well Done! Captain Dave Fath – Amazon – 5 Stars

8. Two Years before the Mast

Two Years Before the Mast is an American classic published in 1840. This is the account of Richard Henry Dana’s two-year adventure as a sailor. Throughout his time sailing around Cape Horn on the brig Pilgrim, Dana kept a diary, and on his return to Massachusetts, he wrote this now-loved classic.

While attending Harvard College, Dana was stricken with measles, which would ultimately have a detrimental effect on his eyesight. Instead of going on a Grand Tour of Europe as most young men did in that era, he decided to work as a sailor, believing the open sea would be good for his health. Born in 1815, Richard Henry Dana was an American lawyer and politician who would become best known for being a champion of the common man.

He was an upperclassman at Harvard University when he left out owing to poor eyesight and opted to join a merchant ship in Boston to keep him busy and aid in his rehabilitation. The sense of unity and purpose that joins sailors on a ship at sea is captured brilliantly by the author.

Having read Moby Dick I felt at home with this tale of the high seas in 1835. Square rigged and ship shape at all times with all the harshness of a life aboard a trading ship traveling from Boston to California . There was no Panama Canal then, so it meant going via Cape Horn and all the problems that the tip of Africa will bring. Rough conditions for a young man to earn his place in the sea going trade. There are hundreds of nautical references that ( if you’re not a sea dog yourself) will have you running to the dictionary ( of Wikipedia) to see just what the author is talking about. You’ll learn interesting facts about what California looked like when its was Mexican territory and the ridiculous amount of work that was involved on just keeping a ship seaworthy. I seriously doubt anyone today could do the job using the same tools and daily hardships that these men encounted. And that’s not counting the real threat of having your back ripped open by the lash for a minor mishap, such ad a misspoke word to the Captain. This not an easy read but it’s enlightening in many aspects

Shogun, the first out of six Asian saga series written by James Clavell in the year 1975, is among the top bestseller list. Many readers have acknowledged the writer’s excellent penmanship. Shogun sold 15 million copies around the world by 1990.

The writer captures sea adventure-loving readers with this great story of a brave English sailor whose ship was blown ashore in Japan. The unfortunate incident leads him to meet a power-thirsty warlord and a beautiful lady with double personalities that changed his life.

I have rated this book too the highest rank because I think this book is an excellent book an it has all the real history about the Shengoku period and also when the Portuguese had get an access to their land witch the Japanese didn’t really like but they needed the trade and experience by the Portuguese. This book is an excellent book for history lovers.

Sailors are great story-tellers & TheSeaholic is coming up with lot of exciting stuff. Keep Supporting 🙂