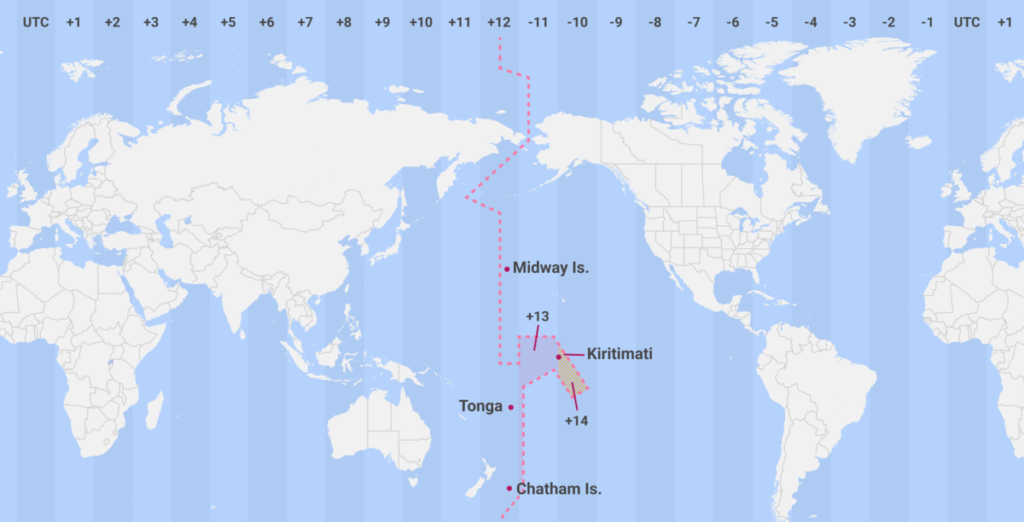 The International Date Line (IDL) passes through the Pacific Ocean. It is an imaginary line, like longitudes and latitudes. The time difference on either side of this line is 24 hours. So, the date changes as soon as one crosses this line. To avoid any confusion of date, this line is drawn through where the sea lies and not land. Hence, the IDL is drawn in a zig-zag manner.

If IDL was a straight line then it could pass through several countries, Islands nations like Fiji, Tonga etc dividing them into a difference of 24 hours on either side of this line.

What is International Date Line

The International Date Line is an imaginary zig zag line on the surface of the earth roughly following the 180 degree meridian. Crossing the date line causes the date to be changed exactly by one day. Crossing the line from East to West , one loses a day and from West to East, one gains a day.

The International date line is not a line of longitude. It’s an arbitrary line to determine where in the world a new day begins.

At the 180 degree meridian a very interesting practice is followed. There are 360 degree of longitude. The Earth takes twenty-four hours to rotate through 360 degree.

Hence two places that are 15 degree of longitude apart have a difference of one hour, in time. As the Sun rises in the east and sets in the west. This adds up to a difference of 24 hours or one day between east and west of 180 degree line of longitude. This leads to an error in the calendar, to correct which, it has been decided to have an International Date Line. On crossing this line the date has to be adjusted.

The International Date Line is one of the imaginary lines like longitude and latitudes that demarcates the change of one day to next in a calendar and runs from the North Pole to the South Pole.

It is along the 180 degree meridian, but swerves from it where there is land, to avoid confusion on the date. It would be very inconvenient if one part of a country had one date of the week while another part had the next day. Read more about IDL here

International Date Line is not straight?

The International Date Line runs from the North Pole to the South Pole and divides the Earth into two half the Western and Eastern Hemisphere. It is not straight, but zigzags avoid political and country borders and to not cut any countries in half.

In the same way that time zone line demarcation will most of the time follow borders between countries, states or provinces so as to avoid instances of people living in the same region having different hours.

Explanation – Why IDL is zigzag line?

If the timezones were perfectly straight, then each hour time change would occur in 15 degree increments on either side of 0 longitude (Greenwich). That’s bad news for a city like Denver which straddles longitude 105 W. Half the city would be on a different time than the other half! Can you imagine the confusion? Truck shipments, postal service, transit routes, doctors appointments, etc. would all be difficult to schedule. So, it is easier for the city to share the same time zone. This holds true for most states and most smaller countries as well.

In fact, the vast majority of countries are just one time zone. I think there are only 12 countries in the world which span more than one time zone (e.g. USA, Canada, Russia, and others). It is much simpler for government, communications, trade, transportation, etc. if the entire country is on one time zone. And if the “solar noon” occurs at 12:15 in eastern France and 12:45 in western France, no one is really going to notice unless you are out there with a compass measuring the height of the sun.

However, there is one really absurd exception to this. If you look at the map, you may notice that China is one time zone. I think this is done for political reasons: the Chinese government wants to maintain a very centralized power structure with Beijing at the center. As a result, in western China, the solar noon occurs 4 hours after the solar noon in eastern China. This means that if 1 man in Changchun and 1 man in Kashgar both set their alarm for 8 a.m., the man in Changchun will wake up to the sun high in the sky, while the man in Kashgar will wake up in darkness***.

Another bizarre consequence of this situation is that passing over the border from Tajikistan to China means you have to switch your watch ahead by 3 hours. (Note: India is also entirely one time zone, likely for similar reasons although India does not span quite as many degrees of longitude so it is slightly less noticeable).

The original international date line was straight, and it was agreed by people on Europe, who basically decided ‘let’s put it on the opposite side of the world from London because that’s so far away that it won’t affect us and the people who live there don’t matter anyway’.

Unsurprisingly, people living in those areas found it inconvenient having the lands they live in cut in two by an arbitrary line that makes it officially one day on one side of the line and a different day on the other, so they set their own time zones to make things work for them.

Today, the International Date line is not actually an official line agreed by consensus or a majority vote or anything like that. It is simply a timezone boundary that exists as a consequence of how the countries on either side define their timezones.

Do you know? International Time Lines are also not Straight.

Additional Argument: War and politics created the date line. The first dateline was created in London in about 1787 by the British Royal Academy of Science. At that time ships had regularly begun to travel the Pacific through the straits of Magellan. They would sail between London and the orient through what was then called the Spice Iles, Polynesia.

When they got to India, something strange kept happening. If they sailed from London around Cape Horn everything was normal, but if the ships sailed around South America they would be a day behind in their logbooks.

So, in the late 18th century the RAS realized they needed an indicator between today and tomorrow. So they marked on a globe a line where London was located and called it the Prime Meridian. Then they divided the globe into 180 degree hemispheres.

The equator was decided upon with an educated guess, and they chose a neutral point in the Gulf of Gunea as absolute Zero.

Now, the British Empire did not actually ask anyone else where the Meridian should be, but they chose the dateline as the middle of the Pacific because they thought nobody of any consequence lived there.

180 actually crosses through three countries, so when the United Nations was founded in the precursor years to the Cold War, they established the International Dateline.

First there was the Russia/US bump, then later came New Zealand so its outlying territories stayed on the same day as the main. Then Tonga declared all its waters to be Eastern. The last modification was in the 1990s when Kiribati skipped a day on Jan 1, 1995 to unify all their islands on one side the line.

To this day Kiribati is the first country to ring in the new year, 14 hours ahead of London.

Note: because of this change, one could reasonably argue that while each time zone observes only 24 hours in a day, the day takes 26 hours to complete.