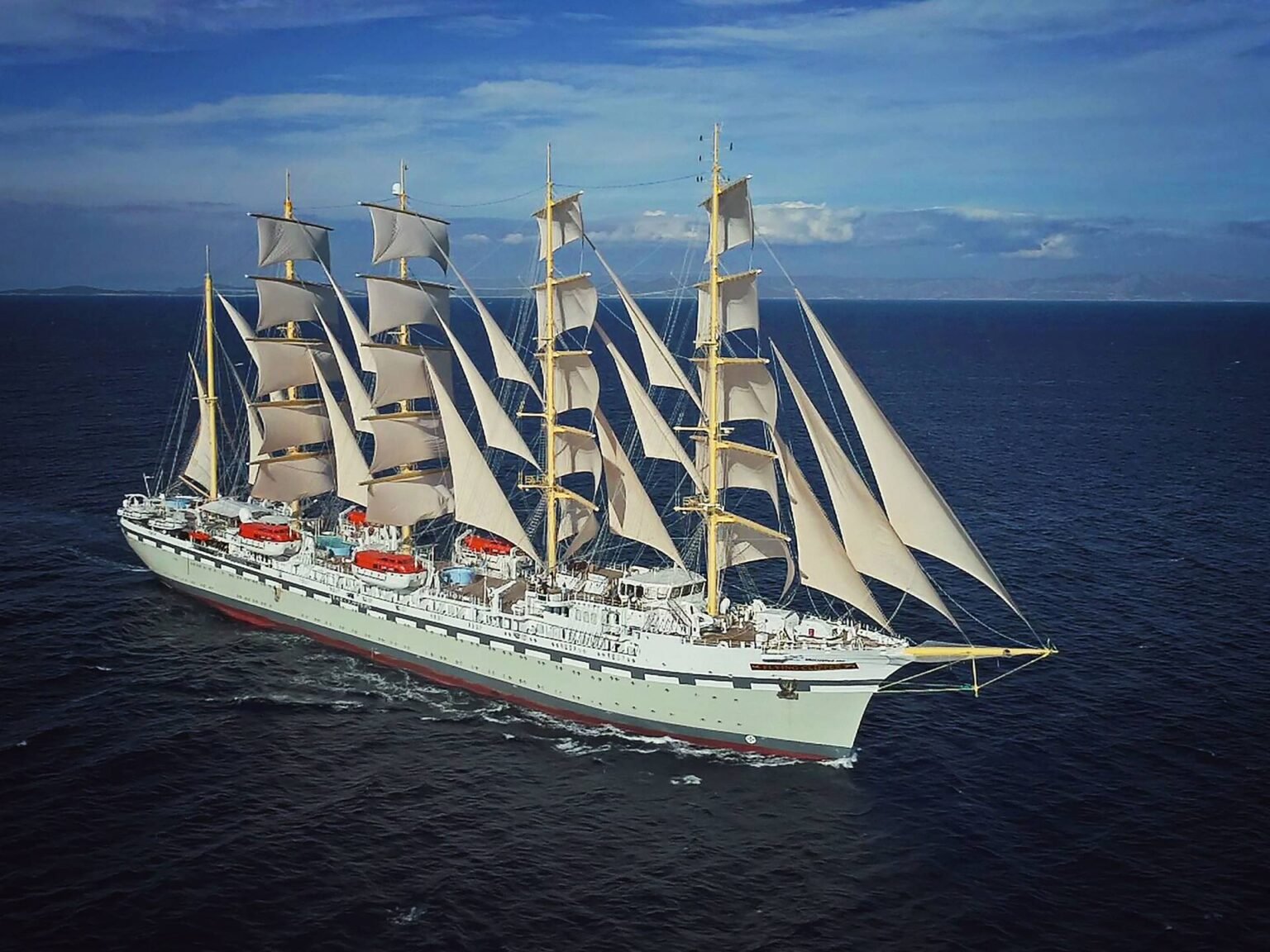 The world’s largest sailing ship was launched at the Brodosplit shipyard in Croatia on Saturday.

The Flying Clipper is a near replica of the France II ordered in 1911 at La Gironde shipyard Bordeaux.

The vessel has been under construction for two years for Monaco-based Star Clippers. Flying Clipper has a steel hull and will have teak decking. She is 162 meters (532 feet) long and 18.5 meters (60 feet) wide, with a deadweight of 2,000 tons. She will be square-rigged with five masts and have an overall sail surface of 6,347 square meters (68,300 square feet).

Flying Clipper has five decks, with accommodation for 450 persons, 300 passengers in 150 luxury cabins, and 74 crew cabins for 150 crew members.

The ship is intended exclusively for sailing, although she will have two fully independent electric engines. She will meet Safe Return to Port requirements with twin engine rooms and an additional bridge. The design will enable the vessel to return to port from around 2,000 nautical miles from shore.

Flying Clipper is designed to sail in all oceans including the Arctic and Antarctic and will be built to meet ice class requirements. She is expected to be capable of sailing at up to 20 knots under the favorable weather conditions and at around 16 knots under power.

Flying Clipper will be the fourth sailing vessel for Star Clippers when she enters service in 2018.

27 September 2019 – The world’s largest sailing ship,  the ‘Flying Clipper’, which was built by Croatian shipyard Brodosplit and will enter the Guinness Book of Records, this week took to the seas near Split with all its sails up for the first time.

162 meters long and 18.5 meters wide, with a deadweight of 2000 tons have five masts and sails with the overall surface of 6.347 square meters. The type of clipper sailing boat with such sail-plan is called Bark. Flying Clipper has five decks, with accommodation for 450 persons, 300 passengers in 150 luxury cabins, and 74 crew cabins for 150 crew members.

A marine platform that is at the stern is equipped with the mechanism for opening and lowering the sea level so that the passengers have direct sea access. The ship has steel construction while the deck is fully covered by the highest quality teak.Three swimming pools with fresh or seawater and underwater lights, heating, and bubbles are on the ship as well. One of the pools would be used for diving, 50 cubic meters of water is the volume of the largest swimming pool.

It has the Safe Return to Port system that is installed in Croatia for the first time. This is a novelty in the Croatian market and there have been new standards for increased safety of passenger ships, passengers and crew since 2010. This system means that all key equipment on the ship is duplicated therefore there are two engine rooms built with all-electric energy and water supply plants and all fuel and oil systems with the additional bridge. Everything is doubled on the ship so that in the case of any defect, fire or flooding of any space or zone on the ship, the ship will be able to return safely to port from the distance of almost 2000 NM which is the farthest point from land to sea.

It is planned that the ship will be able to sail in all seas of the world, even in the Arctic and Antarctic regions so it is built to comply with Ice Class Requirements. The ship’s speed with the sails will be about 16 knots, and it is envisaged that it will be able to navigate up to 20 knots under the favorable weather conditions and operated by the capable crew. It navigate at 17 knots of speed powered by its two engines, it has pitch propellers, bow thruster and two rudders enabling it with extreme maneuvering abilities. Six lifeboats will be used as tender boats for transport of passengers to smaller ports or beaches, eight rafts, four sports boats, and two smaller boats.